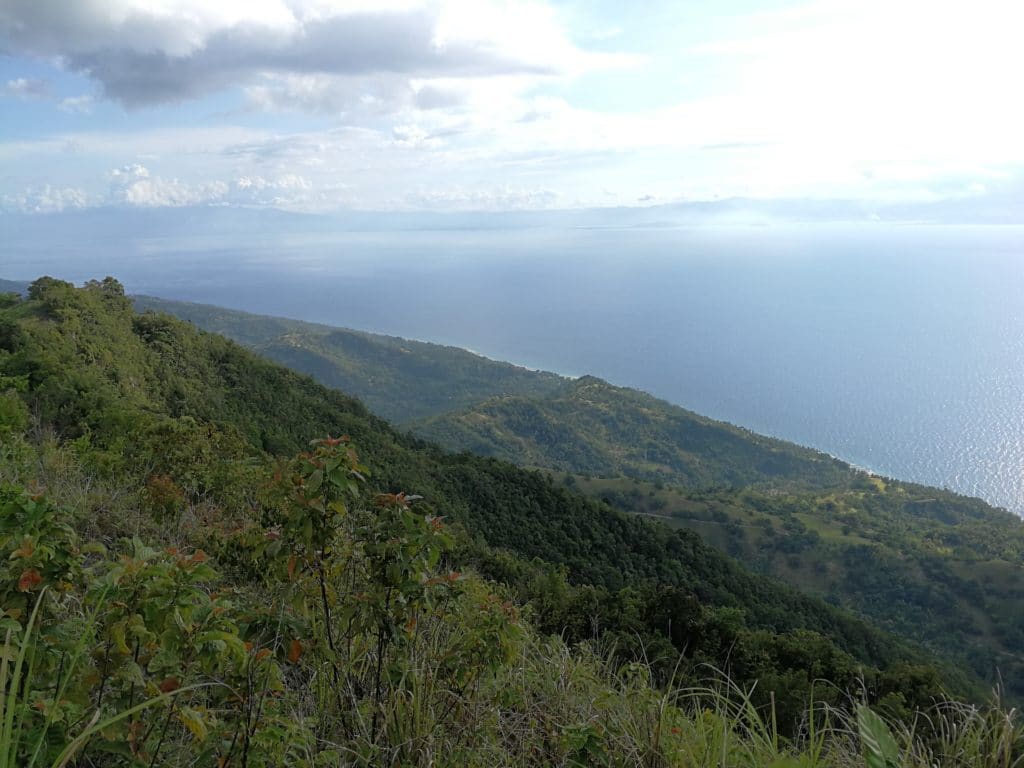 I’ve been hearing stories from my former colleagues, hikers, travelers, even from my two wandering nephews about the beauty of Mt. Lanaya in Alegria, Cebu. Not quite interested or I didn’t feel the excitement. But at the back of my mind, I thought of climbing the mountain with my nephews and nieces. Later did I realize that somehow I’m bound to climb that mountain not with my nephews or my old friends, but with my newly-found friends.

I am attending the Organic Agriculture Production (OAP) NCII course at Saint Peter Academy of Alegria Foundation Inc. (SPAAFI) Demo Farm. One of the Saturdays during our classes, the Group 1-C, where I’m a member, went to check our fertilizers (Bokashi, Organic Compost and Fortified Organic Fertilizer). Since it’s Saturday, we decided to enjoy the rest of the day and relax our tired body and brain from the week-long series of lectures, oral and written exams. It was a last-minute decision just finalized as we went out of the demo farm school. So, it’s just me, Ry, Me, Rica, Brave, and Seph. Just across is where KC (Group 1-B) lived – around 5 months pregnant-and we invited her. Glen (Group 1-B) also joined us. So, all in all, there were 8 of us.

Off we went to Me’s place since she is living at the foot of the mountain. Aside from that, we went there because she invited us over their place.

After having lunch at Me’s house, we head straight towards her uncle’s house where the shortcut trail to Mt. Lanaya begins. We walked around 15 or 20 minutes, then we reached the house. But before that, we’ve passed by a house where there is a monkey pet in a cage. Our male friends were having fun taking pictures with the monkey, especially Glen.

We asked for a gallon of water from Me’s uncle. We’re supposed to pay it, but he’s very kind and gave it for free. As we were about to ascend, KC decided to just stay behind and wait for us. That was the best move she could make as the trail was steep and very dangerous. So only the 7 of us went on the journey. It was only Me who knew the place, and the rest of us are first-timers, even first-time hikers.

To cut the long story and the very thrilling trail short, we’ve arrived at the end of the trail after 1 hour and 30 minutes. It was all ascending and as you got closer to the peak the steeper it’ll become, like around 60 to 75 degrees (very rough approximation). Very steep, with only trees, shrubs and stones to hold on, no ropes. Glen and Brave seem to be at the tail of the group. Rica and Me led the way. Seph tried to accompany Glen and Brave, but eventually catch up with Rica and Me. Ry slowed down and sped up sometimes. As for me, I’m trying to catch up, even though I’m catching my breath already.

After we rested, we hike again, for another 20 minutes or so, before reaching the top of Mount Lanaya. NO ENTRANCE FEE. NO environmental fee, whatsoever. We are just paying the toll with our dedication to trekking on an early hot afternoon around 2 PM. Fortunately, since we were traversing the mountains, tall trees have been covering us from the scorching heat of the sun.

However, at the peak, I felt glorious and seem to have conquered the world. Not just that, we got to see green everywhere, which soothed our tired and exhausted mind and body. We felt relaxed, relieved and awed with the greenery. In addition, we created a stronger bond between our teammates and, the seven of us. On top of it all, we added another milestone to our life, maybe checked the items in our bucket list. We also have discovered that we are capable of doing what others, especially hikers and mountaineers can do, minus all the equipment and gadgets.

Of course, selfies and groupies can’t be forgoed when it comes to this kind of adventure. So, we have great pics, thanks to Glen, our monopod, aw, selfie stick. Just kidding. But his arms extended longer, like a selfie stick. Hehehe… Peace Glen. 🤣🤣🤣😁 Anyway, here are some of our pics. 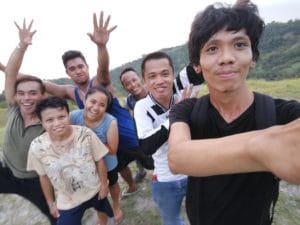 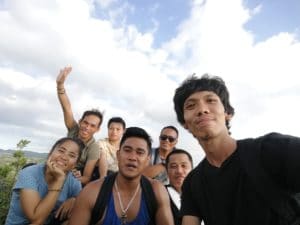 See whose face is always near the camera. And, your guess is right! Hahaha…🤣🤣🤣

I really wanted to watch the sunset from there. But, Ry said it wasn’t a good idea 😉. So, around 5 PM we started our descend. Actually, before the final ascent towards the peak of Mt. Lanaya, there’s a maguey (American Aloe), the one used for Christmas tree and its leaves are usually used for vandalism (maybe an exaggeration, but, sort of). So, we unleashed the hidden calligraphist(not the right term either 🙂 ) within us and left our mark. 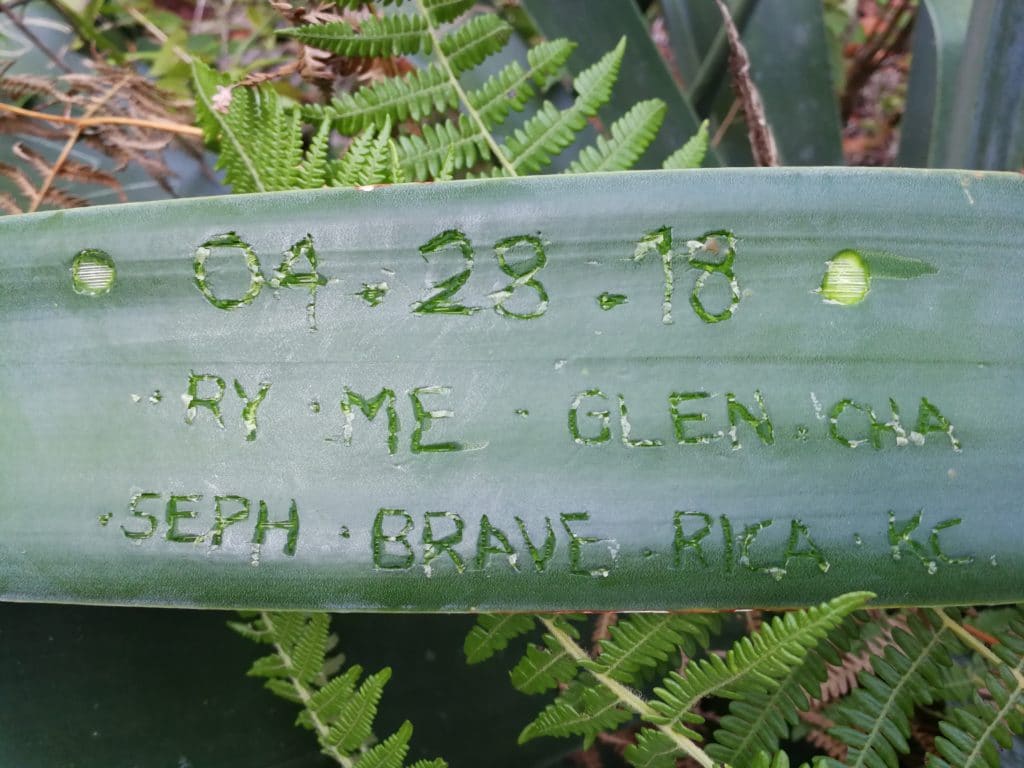 Then we descend and continued to descend, reaching the foot of the mountain (where we left KC) after around 45 minutes. The descent was easier for the fact that we know the trail already and, it wasn’t as torturing as when we’re ascending. But, of course, you still cannot get away from the steepest part of the trail. So, you need to brace yourself, strengthen your feet and tighten your grip. One wrong step eventually makes you out of balance, and you may drag the rest of friends, down. A little faster, but, painful. Ouchie!

Not far away there’s a hill that’s very scenic. Locals said it is a camping site, where travelers used to pass the night. It was a great place, where we marveled and reflected on our risky, yet fun adventure. We wondered how did we manage to reach there and back. Then, we commended ourselves for another challenge accepted and conquered.

Side note: Unfortunately, after that fun adventure, Seph and Brave faced an unacceptable fate of being evicted from the house they’re living in for a very shallow reason. Anyway, though they might feel sad due to that unexpected turn of events, Glen is with wide arms open, welcome the two in their home. THAT’S TRUE FRIENDSHIP. God always planned everything. He may have allowed that unpleasant thing to happen but He also sent Glen as an instrument to rescue Seph and Brand and accommodate them.

BE INSPIRED. INSPIRE. BE AN INSPIRATION.

Hi there and welcome to my blog!

It’s such a great honor to have you here, taking your precious time to read some of my articles. This website contains nearly everything that gives my life an “extra plus” – personal experiences, lessons learned, reflections, insights, travels, promos I’m interested to share, as well as things I’m getting excited about – nearly anything interesting under the sun.

I hope you enjoy your visit.

Should you have comments or suggestions to help better this site, do not hesitate to contact me at admin@theextraplus.com. If you also would like to partner with me or you have some stories to tell, you can also shoot me an email.